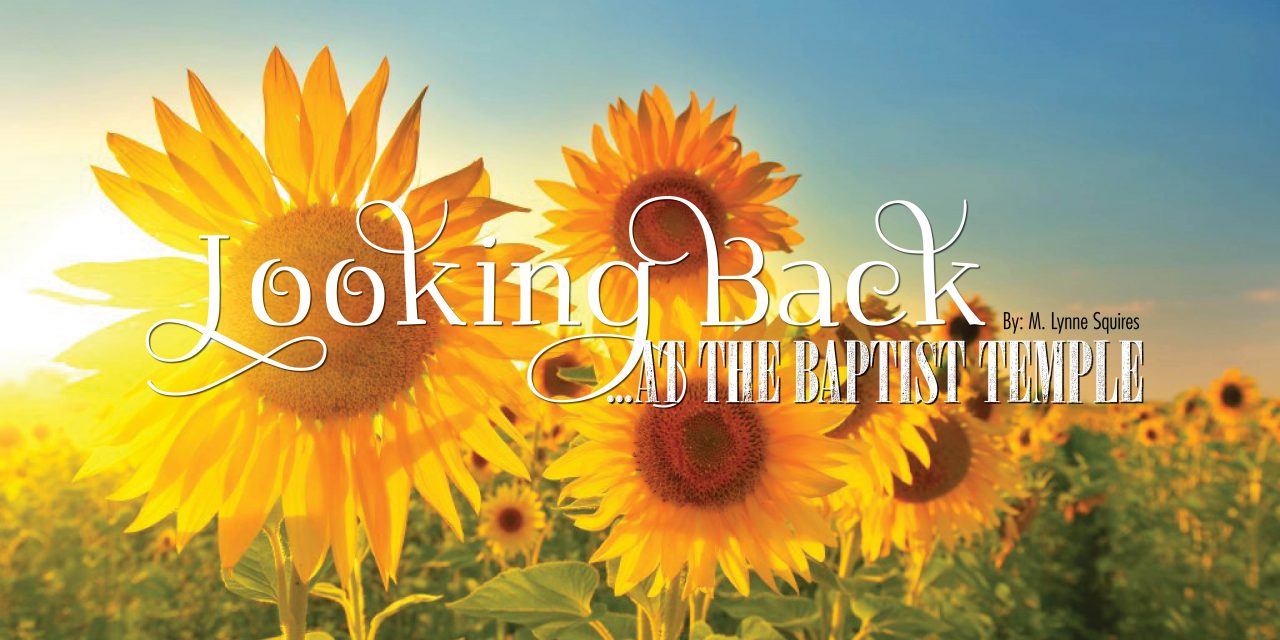 Looking Back​ at the Baptist Temple 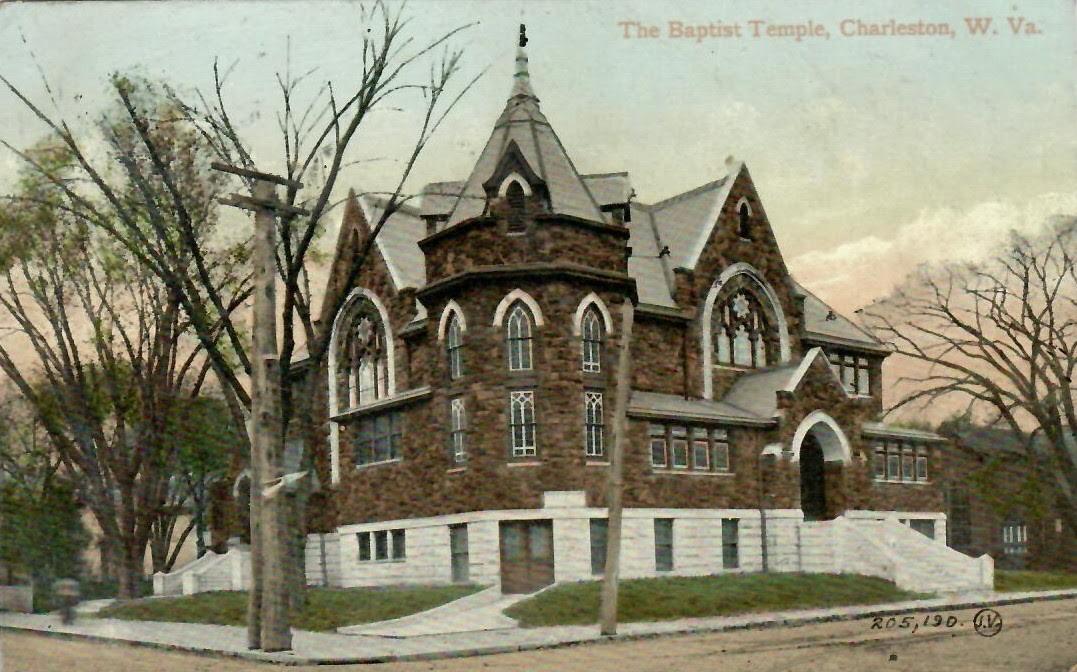 The United States Naval Academy chapel, the Corcoran Gallery of Art, and the Scribner Building were all outstanding examples of the work of renowned architect Ernest Flagg. Add to that list a local building – the Charleston Baptist Temple. Flagg designed four church buildings and one synagogue during his career. The only structure in West Virginia designed by Flagg was added to the National Register of Historic Places in 2000.

As we know it today, the Baptist Temple was constructed in 1924, but there were several church homes before the Morris Street location.  The congregation began as the Charleston Baptist Church in 1869 and met in the Kanawha County Courthouse. In 1891, a single-room building was the first constructed by the church on Donnally Street. By 1901, in need of more space, a wood-framed temporary church was built. The new church was a brick and stone structure constructed on the same lot at the corner of Washington and Capital streets.

Less than twenty years later, as the congregation increased and the programs and activities expanded, a larger building was deemed necessary. A lot was purchased in 1919, and fundraising began. The lot was in the city’s East End amidst the stately homes built between the Kanawha River and Lee Street. The new church was dedicated in 1925.  Downtown Charleston businesses expanded east over the years, and the Baptist Temple is now among a mix of residential and commercial buildings.

The Baptist Temple is a two-story, red-brick church with Georgian and Federal-style details. The central section, housing the sanctuary, has two matching wings. A later addition was added to the rear. The east and west wings are smaller in scale and house offices, a parlor, classrooms, and the like. The rear addition was also constructed of red brick, allowing it to blend seamlessly with the original structure. 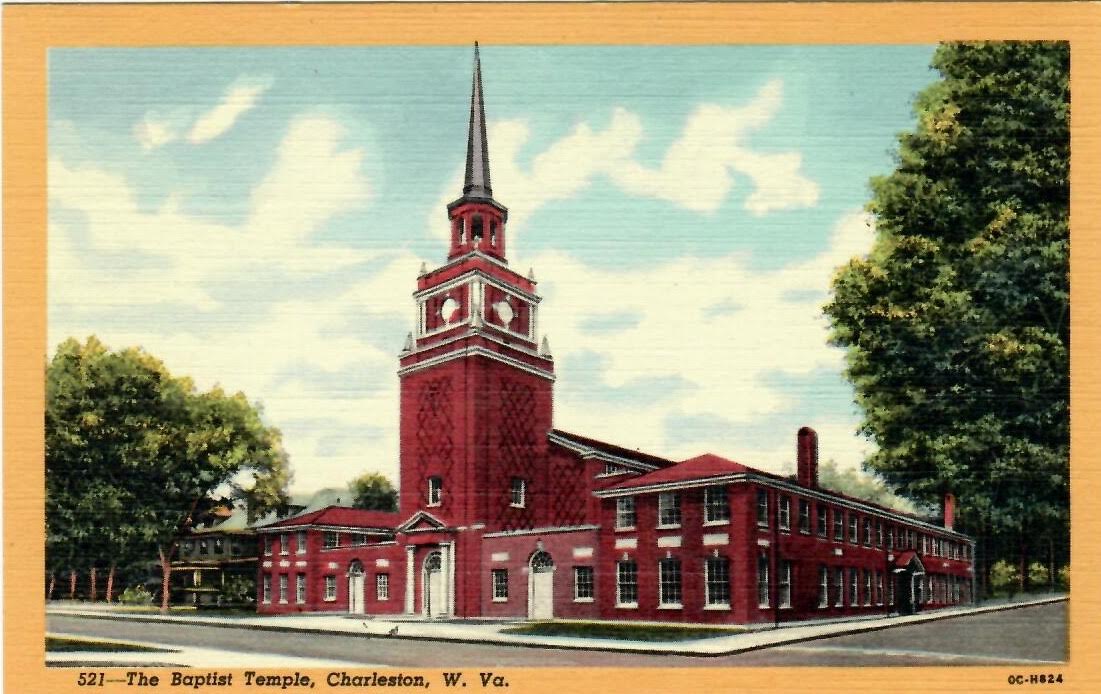 The structure’s symmetry and details are among the most outstanding examples of high-style Colonial Revival architecture in West Virginia.

The tower is the centerpiece of the building. Flagg utilized the regional practice of brick patterning to create an unusual diamond-shaped pattern in the tower. The tower contains the steeple with a copper-clad spire above an open belfry with Corinthian columns and arched openings. Below the belfry is a baluster area above the clock portion of the tower.

The church tower didn’t have a clock for some years. As a memorial gift of the Rollyson family, a clock was procured from the old courthouse in Williamson, West Virginia. When a new courthouse was constructed, the clock was not included in the design. After modifications to allow it to fit the Baptist Temple tower, the 1903 Seth Thomas clock was set in place, ringing it at 6,000 pounds. A 700-pound cast bronze bell and hammer could ring the hours.

The Baptist Temple’s worship bulletin of September 24, 1926, noted: “Mr. Flagg, architect for our new building, was in town last Sunday and looked over our building and declared himself well pleased with it, saying it was the last word in modern church equipment and that eyes from the state and without our borders would turn this way as we begin to use it. He remarked about the ample spaces and beautiful external appearance setting a new standard for churchly appearances and adequate equipment for all-round modern church work.”

Just as Flagg observed in 1926, the Baptist Temple is an outstanding example of ecclesiastical architecture in the Kanawha Valley. Nearly 100 years later, he would still be correct in his assessment.

Email your responses about the Baptist Temple
or requests for locations you’d like Looking Back to
visit to thewriter@mlynne.com.