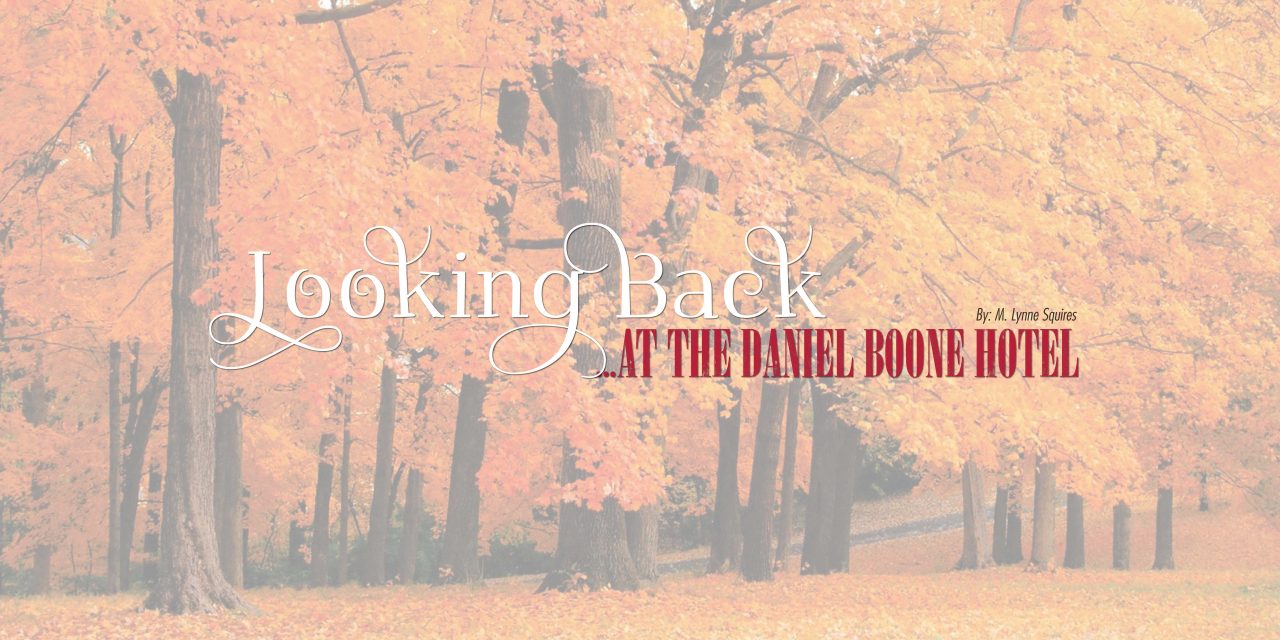 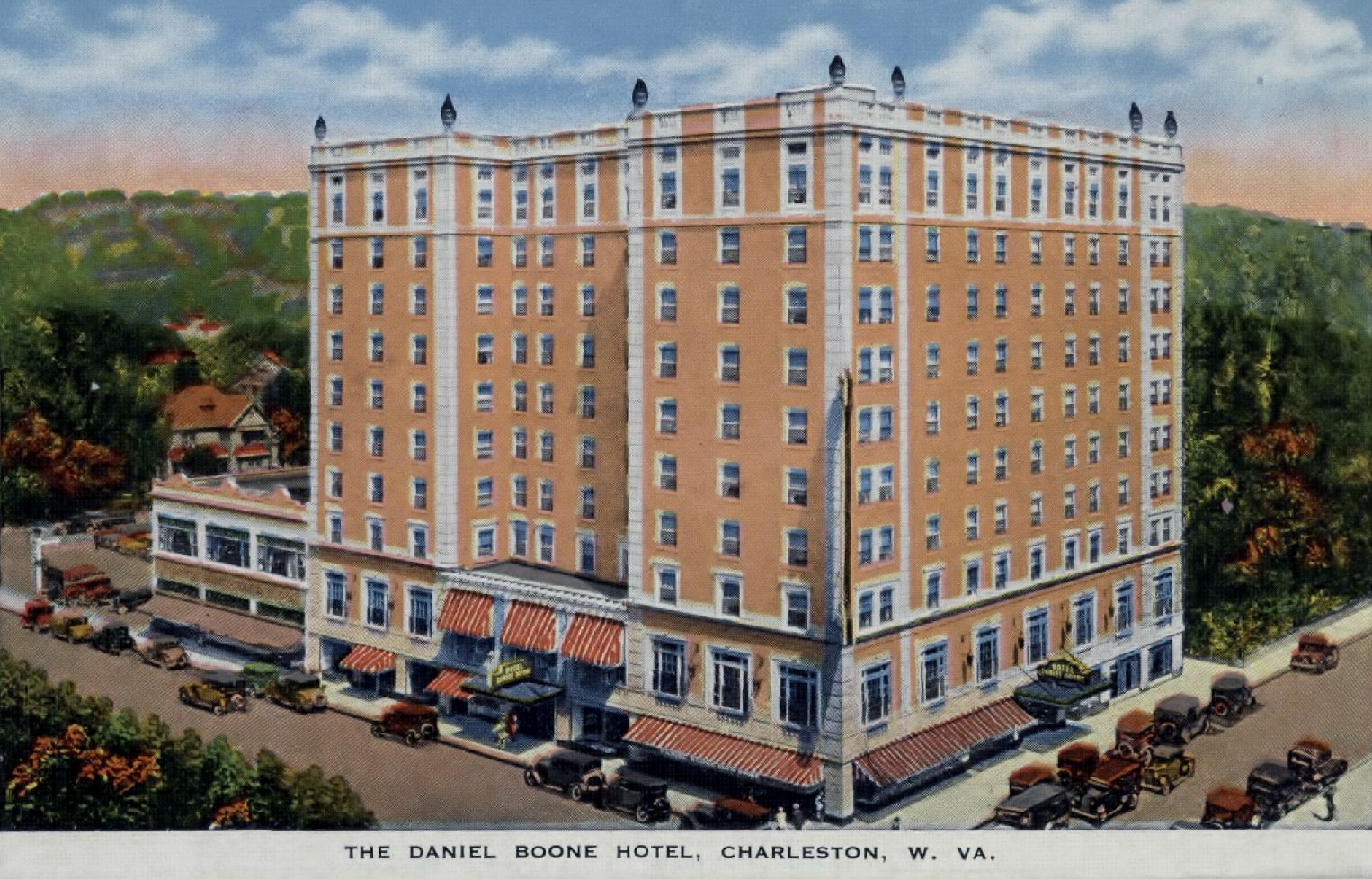 The Daniel Boone Hotel no longer has a star studded guest list. It no longer hosts heads of state, rock stars or honeymooning newlyweds. The halls no longer echo with the maids’ chatter, and the ballroom doesn’t seat ladies awaiting a dance partner. The former crown jewel of the capital city, Charleston’s Daniel Boone Hotel, is now an office building.

Today people come and go visiting a dentist, attorneys, and other professionals that are spread out from the mezzanine to the penthouse. The lobby and the double mezzanine floors maintain a few vestiges of the hotels former splendor; the staircase to the mezzanine floors, the registration desk, and the intricate hexagon tile work on the floor below the lobby entrance, and several original light fixtures. The original elevator doors still flank the gleaming brass US Mail box. A sign above each of the doors remind people that the lifts are no longer working elevators.

Listed on the National Register of Historic Places in 1984, the former historic hotel was built between 1927 and 1929, then expanded in 1936 and again in 1949 to provide a total of four hundred and sixty-five rooms, a ballroom and three parlor meeting rooms. A Classical Revival style ten story blond brick, the building boasts an unusual two-story mezzanine and a penthouse. The entire building was an exemplary example of first-class hotel architecture of the 1920s.

The Daniel Boone was built on the corner of Capital and Washington Streets, the previous site of the state’s first governor’s mansion. After the nearby Capitol building was destroyed by fire in 1921, a temporary Capitol was erected where the hotel would later stand. Intended to be a temporary structure, the “paste-board Capitol”, as it was often called, was built in just forty-two days. In 1927 it also caught fire and burned to the ground.

The hotel was conceived by a group of Charleston citizens known as the Community Hotel Corporation with the goal of providing a fitting location for hosting politicians and visiting dignitaries to the capital city. Wehrle B. Geary, a Roane County entrepreneur and developer of the Diamond Department Store spearheaded the building of the Daniel Boone.

When the Capitol moved to Charleston’s east end, the new hotel served as the unofficial headquarters of West Virginia’s state government. The Daniel Boone housed many state legislators during the 60-day legislative sessions. Most of Charleston’s banquets and conventions were held there. One year saw the hotel hosting a convention of little people, or midgets as they were called at the time, with over eight hundred in attendance. A number of prominent people stayed at the Daniel Boone, including Eleanor Roosevelt, Admiral Richard Byrd, Presidents Herbert Hoover, and Harry Truman. Vice President Lyndon Johnson, and Sen. and Mrs. John F. Kennedy also slept there. Among the entertainment greats visiting town and staying the Daniel Boone were Victor Borge, Gene Autry, Bob Hope, Debbie Reynolds, Jack Dempsey, Guy Lombardo, and the Lawrence Welk Orchestra. Some say the most famous hotel guest was Elvis Presley who visited Charleston in 1975, with his entourage occupying a whopping sixty-three rooms, including the penthouse suite. The ballroom is possibly the least changed section of the hotel. However, the mezzanine, once open to the ballroom floor below is now walled over, with only the front of the supporting pillars left in view. Most of the lighting is original, as is the mahogany wainscoting. One can imagine wedding receptions held there, with the bride tossing her bouquet over the mezzanine railing. In 1981, the Daniel Boone Hotel closed. After renovation and remodeling the building was reopened in 1984 as 405 Capitol Street, an office building with fountains, a spacious atrium, two glass enclosed elevators and a 30-foot indoor waterfall. The exterior of the Daniel Boone Hotel remains virtually unchanged. The awnings over both entrances are original and the fine detail work remains intact. The interior has a nod to its stately past, but primarily the 1980’s renovation takes visual precedence. A massive multi-level garden area stands in the shadow of a two story waterfall, overtaking much of the former lobby. The center of the building is gone, giving way to floors of balconies edging the offices where hotel rooms and suites once stood. The modern flavor of the remodeled hotel’s interior is lovely with an Art Deco flare. But the glimpses of yesteryear leave a melancholy feeling. The memories of the Daniel Boone Hotel linger, vying to hold their footing as the grand lady of the city, while time marches on. 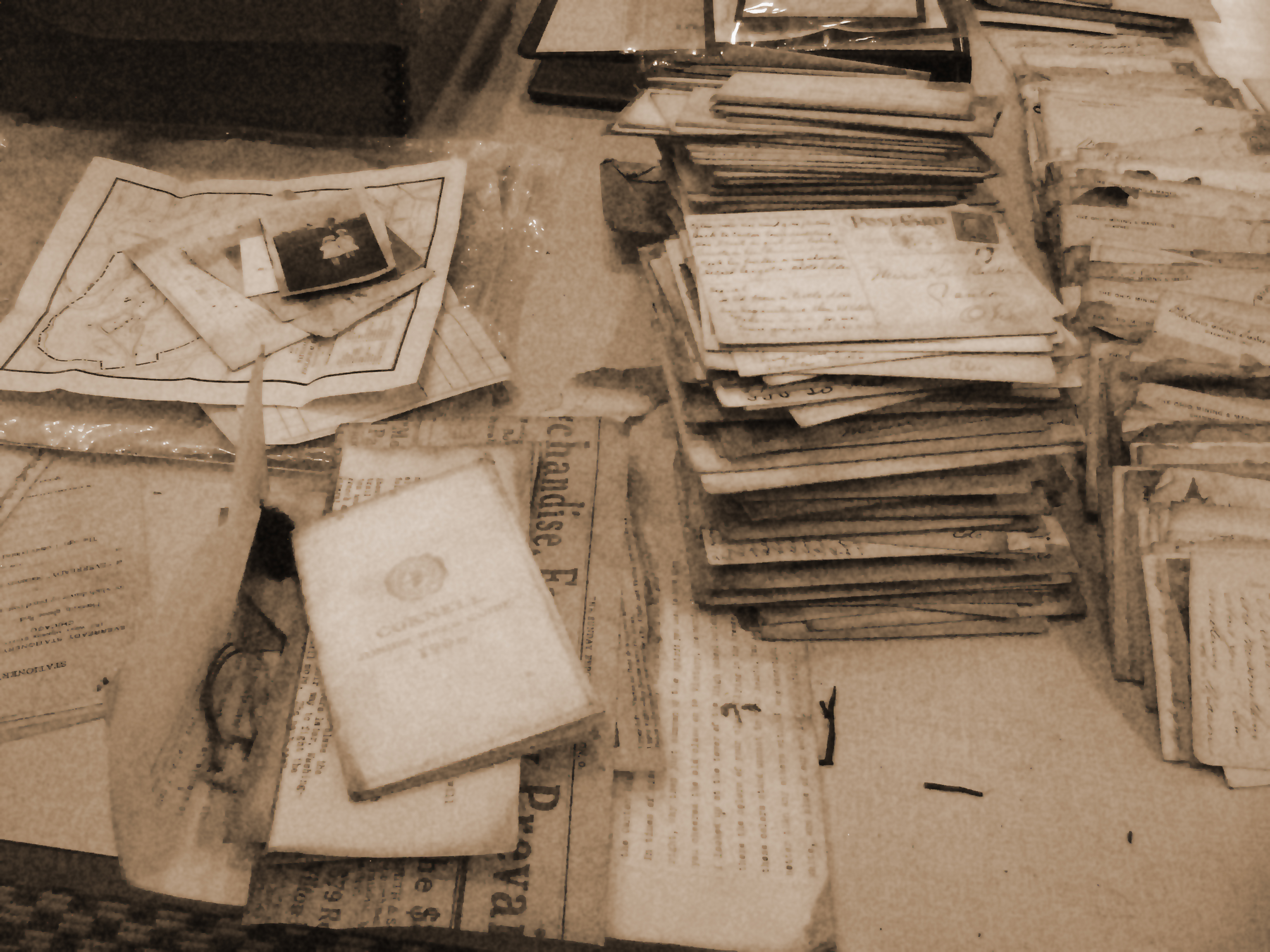 Email your responses about the Daniel Boone Hotel, or requests for locations you’d like Looking Back to visit to thewriter@mlynne.com.