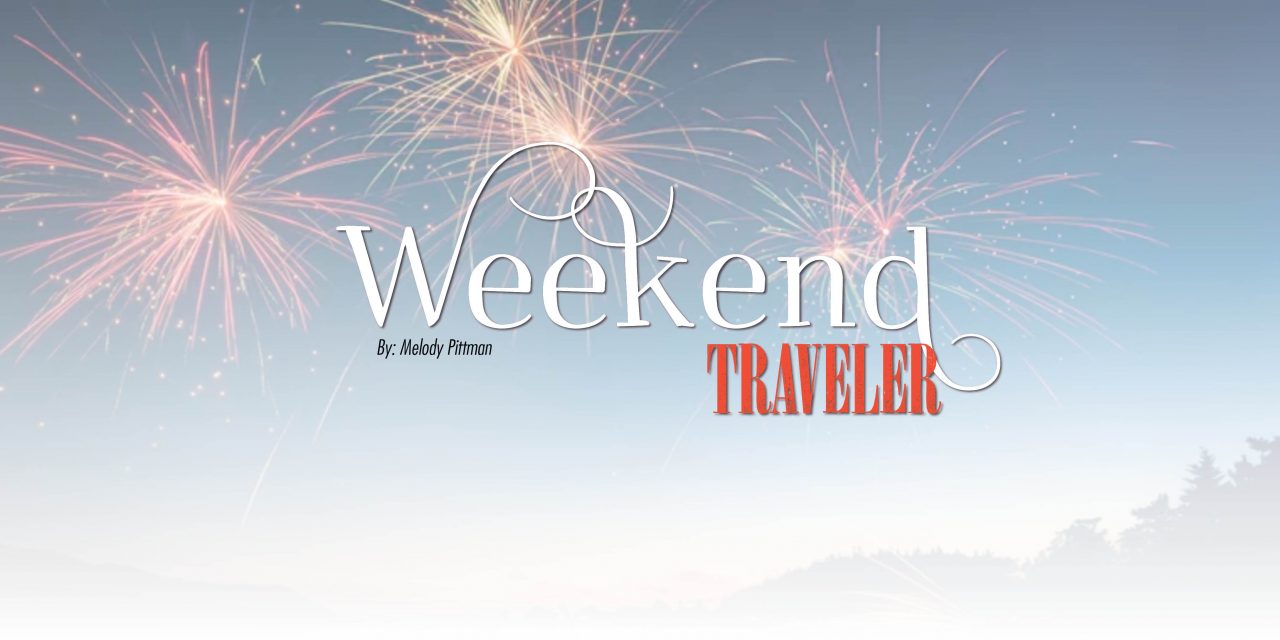 We’re continually on the hunt for experiences that add richness to our lives. In the spirit of the revival of road trips, we are proud to feature a monthly section featuring destinations within driving distance of Charleston. We feel that our smart and savvy readers will find these trips interesting and entertaining. 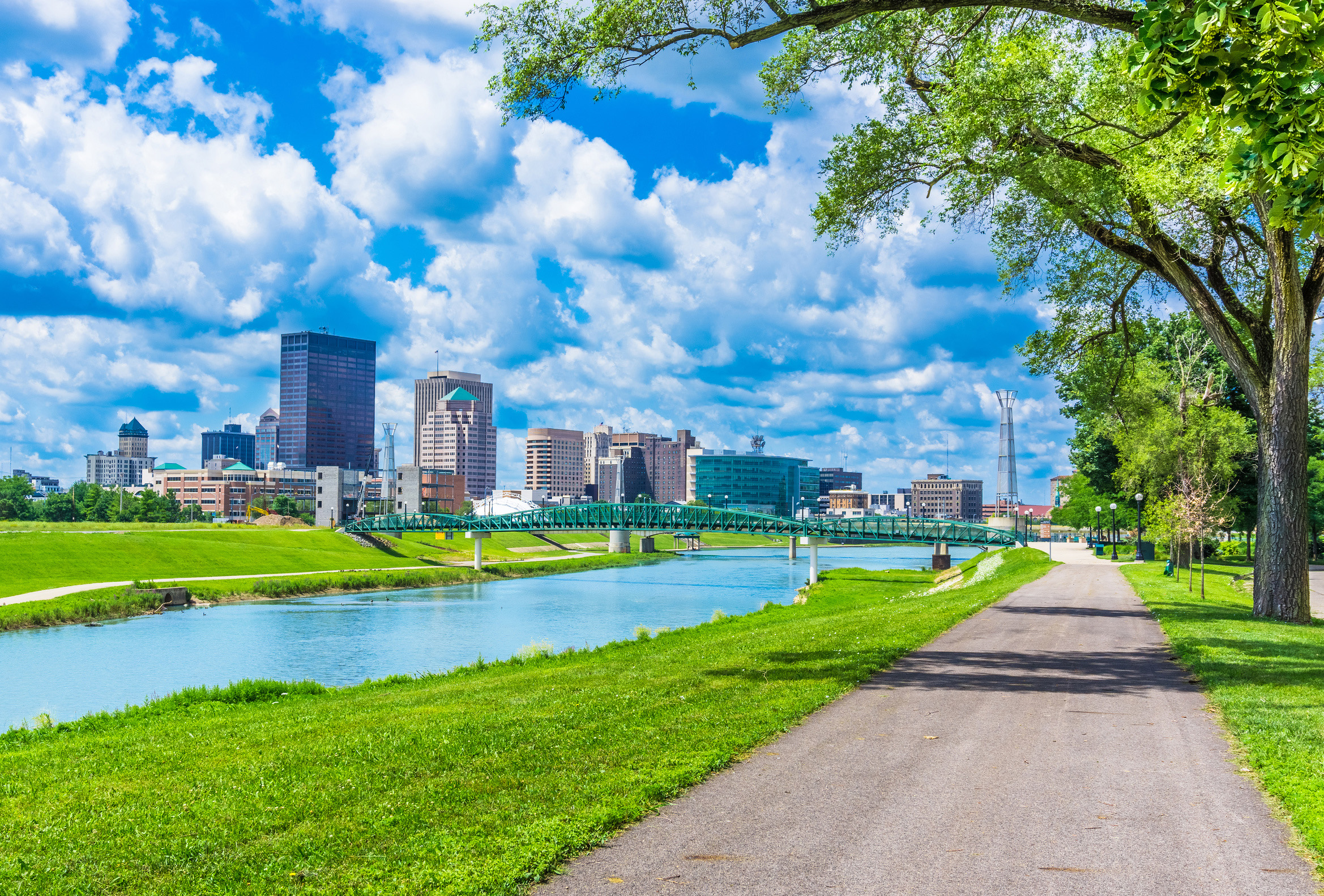 Driving three hours Northwest of Charleston brings you to Dayton, Ohio, the birthplace of aviation. Dayton is deemed a mid-sized city and is known for imagination, innovation, world-class arts, and culture. Thanks to the Wright Patterson Air Force Base, both aeronautical and astronautical engineering has allowed for many of the technological innovations Dayton is famed for. 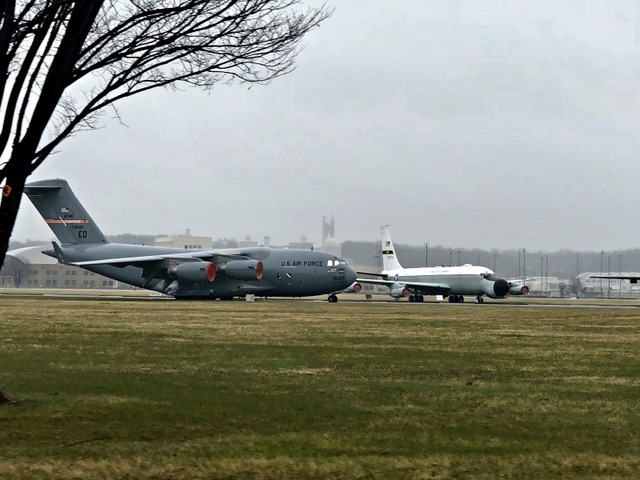 Dayton, Ohio is known as the birthplace of aviation.

WHAT TO DO IN DAYTON 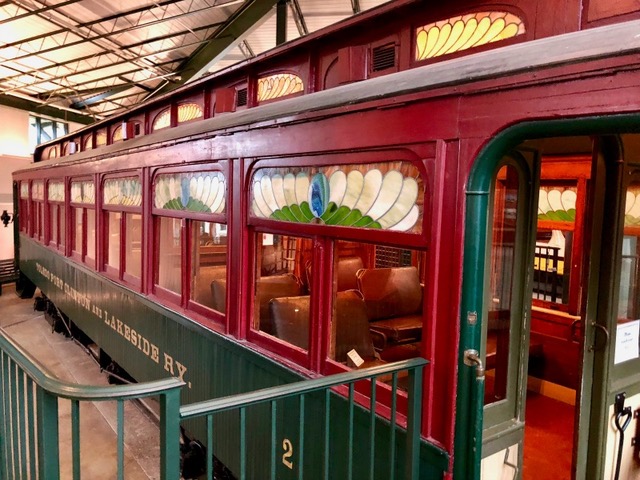 The Carillon Historic Park has a fantastic vintage train collection and exhibit.

Since Dayton (birthplace of Orville Wright) is synonymous with aviation, it is only fitting that visiting the Carillon Historical Park is in your travel plans. This 65-acre complex features living history exhibits and museum displays ranging from the Great Flood of 1913 (Ohio’s worst natural disaster) to a National Cash Register Company exhibit. Also, a village of historical 19th-century buildings that have their own stories is scattered throughout the park. One building houses a superb vintage train collection, many of which you can walk through. The most iconic part of Carillon Historical Park houses the Wright brothers’ famous Wright Flyer III, a National Historic Landmark. Inventors and inventions were 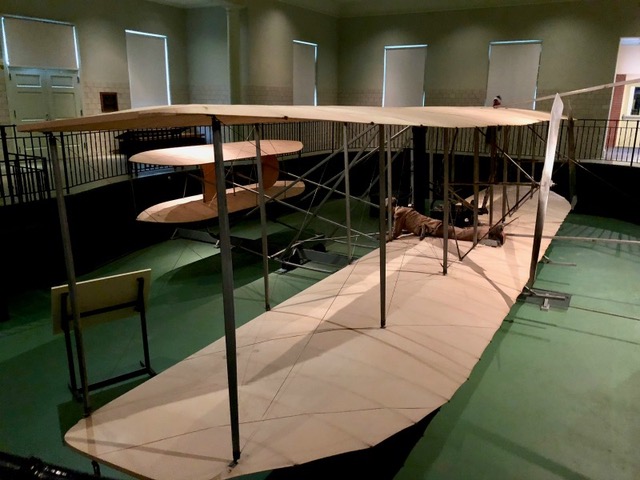 The Wright Flyer III is a National Historic Landmark.

abundant in Dayton, so it is only fitting that the park’s one-of-a-kind carousel has seats made from inventions (like the pop top can, the airplane, and cash register), along with decorative horses. 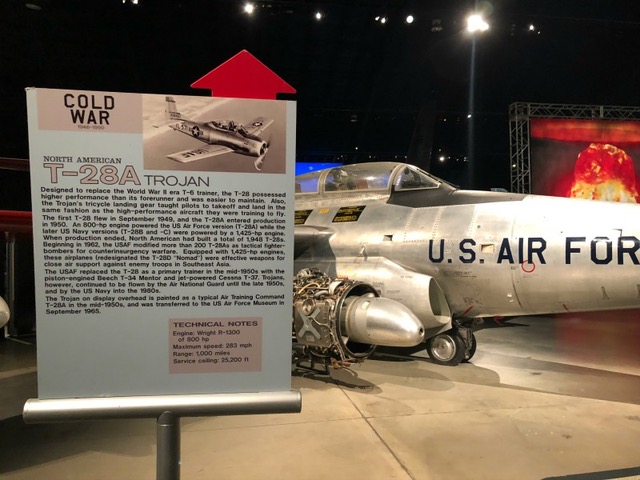 The National Museum of the USAF has a plethora of famous military planes such as this one from the Cold War.

The National Museum of the USAF (United States Air Force) is a must-see. Its vast collection of aircrafts (many from the early 1900’s) is a delight to walk through and see how aviation has changed over the years. There is even a space shuttle exhibit. The National Aviation Hall of Fame is located on the same grounds. 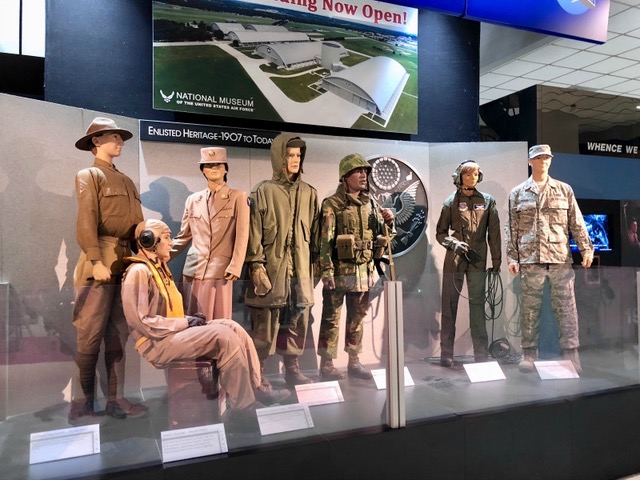 A look at the military uniforms in the National Museum of the USAF.

Visit the Boonshoft Museum of Discovery for kids’ science exhibits and a small zoo.

If performing arts is your niche, Dayton has a plethora of venues including the Benjamin and Marian Schuster Performing Arts Center which is the home to the Dayton Philharmonic Orchestra, Dayton Opera, and Dayton Ballet. The historic Victoria Theatre welcomes off-Broadway productions, concerts, and summer film series, plus local events.

Those looking for sporting events will be pleased to know that Dayton has a minor league baseball team, the Gem City Rollergirls, NCAA basketball, golf, and rugby.

Last, but not least, Dayton is nationally recognized for its world-class gardens. You can see some of them at Cox Arboretum, which features a butterfly house and edible garden, and the Wegerzyn Gardens, home to a nature trail, the Children’s Discovery Garden, and several formal gardens.

WHERE TO EAT IN DAYTON

A fabulous collection of residential and commercial buildings lies in the Oregon    District part of town. Here, you will find nightclubs, independent restaurants, art galleries, specialty shopping, and pubs housed in 1820 to 1915 historic buildings on brick-lined streets. The architecture (from Greek Revival to Federal and Queen Anne) alone is worth admiring. In 1974, the 12 square block area was placed on the National Register of Historic Places.

For an upscale dinner, I recommend Lily’s Bistro, serving seasonal eclectic American food and drinks. Start your meal with the trio of deviled-eggs-of-the-day; they are amazing! Lily’s famous Fried Chicken has a devout foodie following and the Shrimp and Grits is another tasty dish worth trying.

Another great place to eat is Wheat Penny, a restaurant that carefully chooses sourced ingredients and makes nearly every item served from scratch. The Eggplant Fries will knock your socks off! Each strip is rice coated and delicately fried. The fries come with a yogurt sauce, but I preferred marinara. Wheat Penny’s pizzas are sensational as well. Try the Angry Sal (pork sausage and spicy tomato sauce) or the Germantown (bechamel, Ohio German bologna, caraway seeds, and house-made pickles). 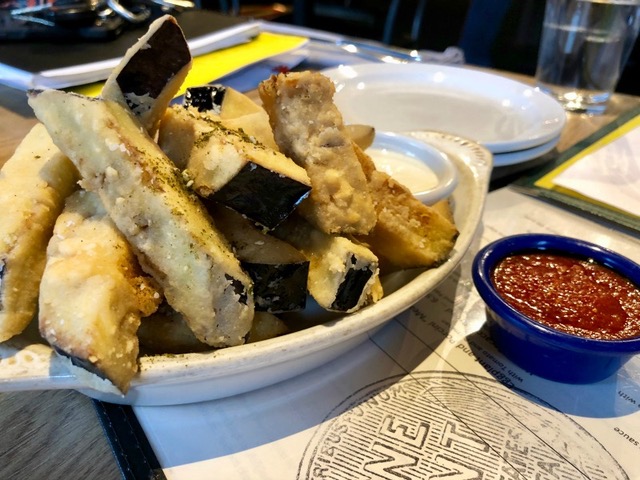 These tasty Eggplant Fries from Wheat Penny could make a vegetable lover out of anyone!

The most acclaimed restaurant in Dayton is The Pine Room, a supper club steakhouse that has received national attention from the media and has the noteworthy food to back it up. It is a Dayton, Ohio landmark.

Hot Head Burritos is an iconic restaurant chain based in Dayton with exotic Mexican style burritos and other favorites.

Thai 9 is my top pick for ethnic dishes and sushi.

WHERE TO STAY IN DAYTON

The SpringHill Suites by Marriott Dayton North is a luxury chain hotel that has beautifully decorated all-room suites, a welcoming lobby, and two swimming pools. Breakfast is included. The Comfort Suites Wright Patterson and Hawthorn Suites by Wyndham Dayton North offer a little lower rate and a more budget traveling approach. They both offer free breakfast and have a swimming pool. 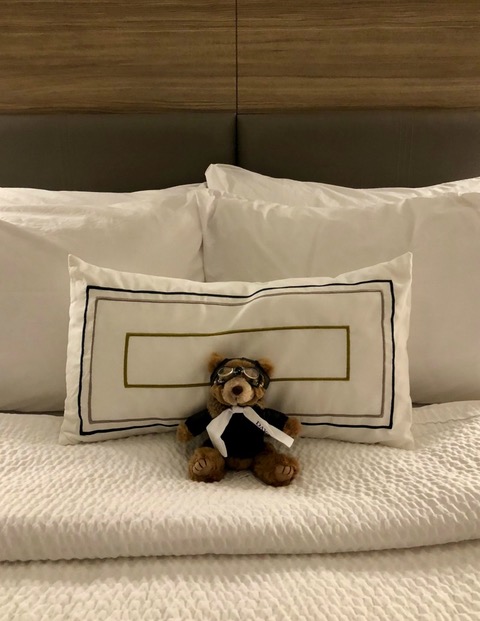 Aviator bear perfectly perched on the bed at the SpringHill Suites in Dayton.

From the world-class gardens and one-of-a-kind museums, inventions to inventors, Dayton offers a deluge of beauty, culture, and history. Explore things I found very regional, yet life-changing to our advances in business and technology, in this Ohio city. Best of all, Dayton is an affordable weekend getaway! I hope you will like what you see in this unique city. 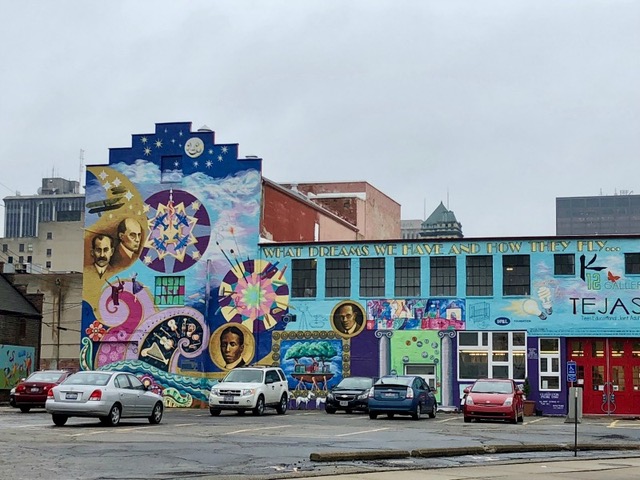 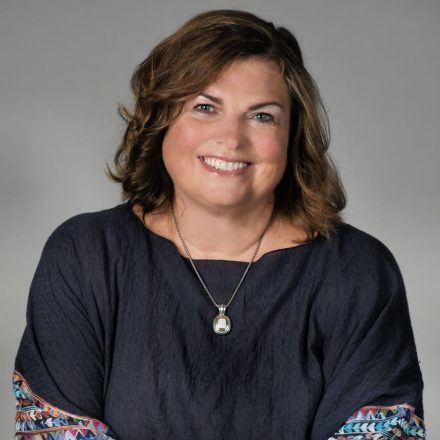 Melody Pittman is a travel writer, freelancer, and influencer who was blessed to call Charleston home for 44 years. She owns and runs two blogs, www.whereverimayroamblog.com and travelthesouthbloggers.com with her daughter, Taylor. They also host an annual travel conference (Southern Travelers Explore) that brings together writers and tourism board professionals from around the country. Melody is a pro cruiser and loves small towns, history, National Parks, and sharing her adventures with her followers. She is currently writing the “100 Things to Do in West Virginia Before You Die” book, which will be released in the spring. You can follow along on the book release at https://www.facebook.com/100ThingsWV/