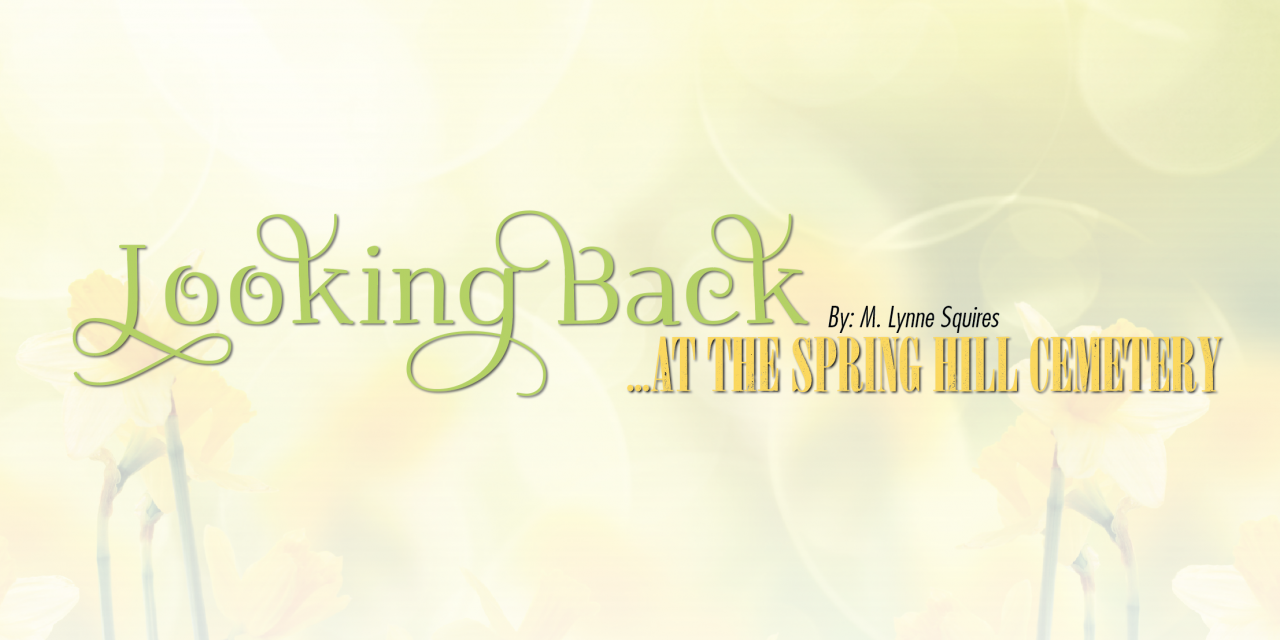 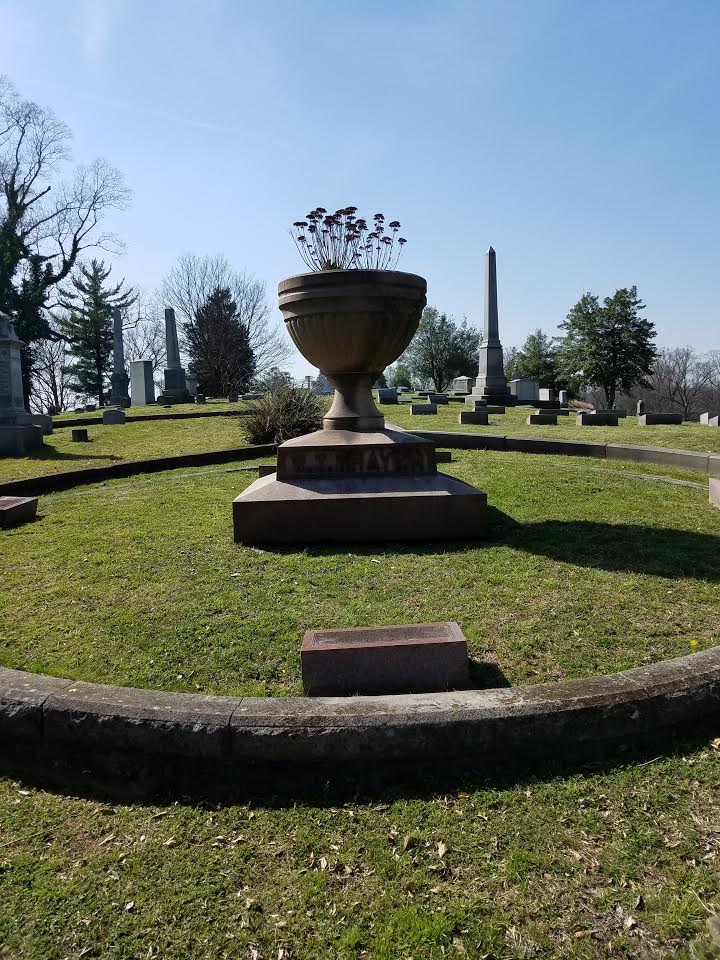 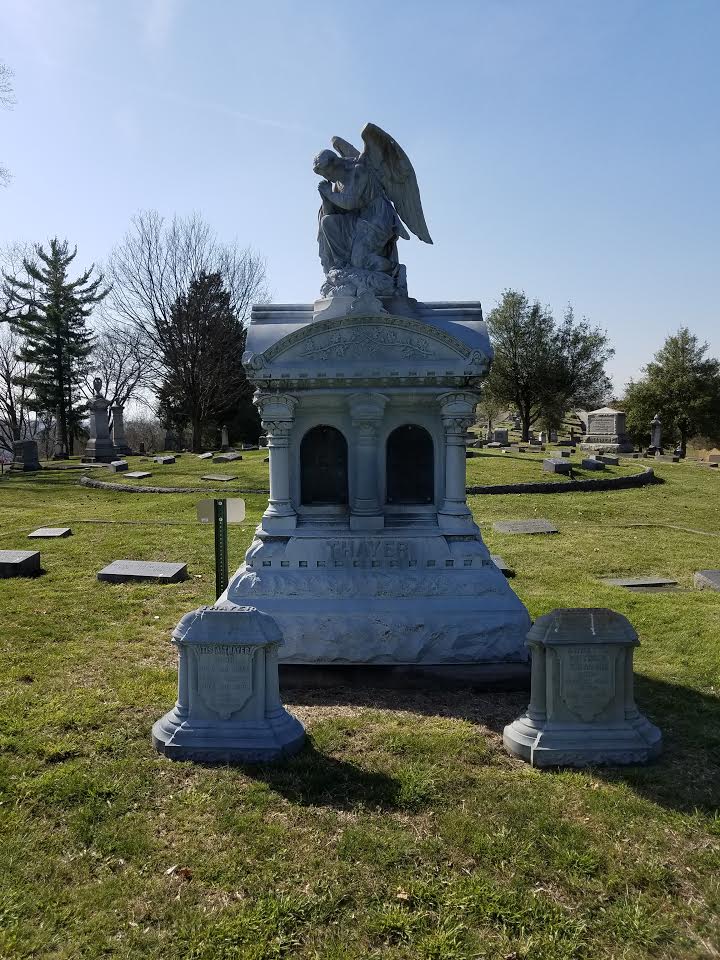 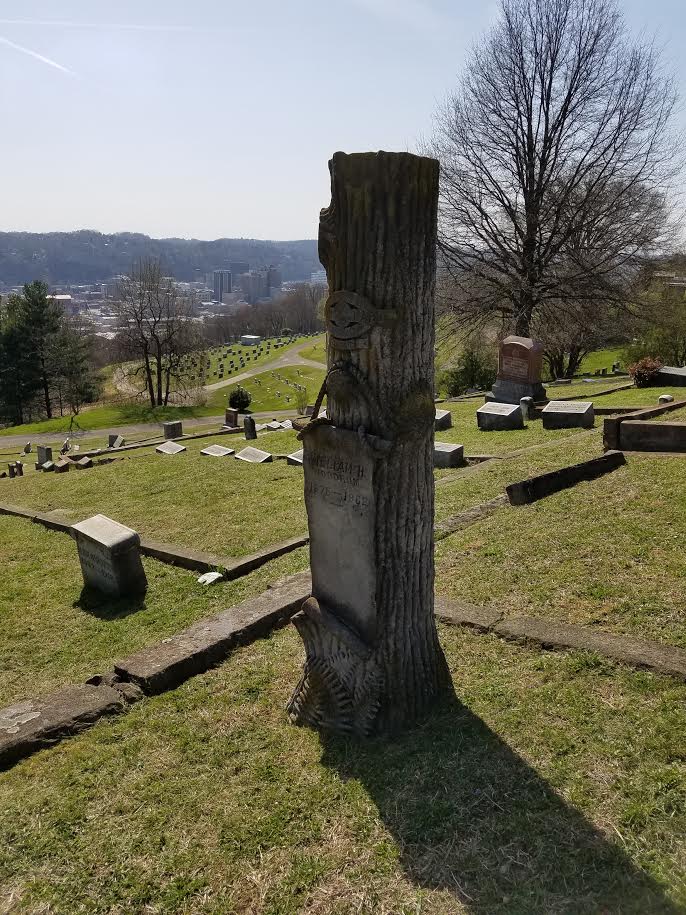 Email your responses about the Spring Hill Cemetery, or requests for locations you’d like Looking Back to visit to thewriter@mlynne.com.

Peaceful. Intriguing. Reflective. All words that describe time spent among the monuments and memories of Spring Hill Cemetery. The seemingly nonsensical curves, angle and turns of the low stone borders lead around and past Charleston’s history, inscribed for perpetuity on marble, limestone, and granite. Viewed from above, intricately designed paths and walkways radiate outward from a rounded, geometric configuration.

In 1869, Charleston’s officials sought out, and purchased for $2118.02, twenty acres atop the hill overlooking downtown. Although not designated as a municipal burying ground until 1869, the oldest recorded burial record is William Lewis, interred October 10, 1818. The Chalybeate Spring nearby inspired the name Spring Hill Cemetery. The ‘Old Circle’ is the original section, designed by civil engineer A.J. Vosburg, is reflective of a Victorian era walking garden.

Other monument designs are plentiful. The Littlepage family plot holds an enormous sandstone acorn. The Stump family plots hold stone markers fashioned into tree trunks. Poetry adorns the flat monuments covering several graves. The impressive Thayer Bowl is central to the graves of the family’s earliest members. Several feet away, an intricately detailed kneeling angel towers above the plots of the later Thayer generations. The angel statue is comprised entirely of zinc, giving it a bluish hue. The grave of Frank Cart, a member of the first locomotive union, is adorned with a train carved into a red granite marker.

Styles of monuments, markers, and crypts range from Art Deco, Neo-Classical Revival, Romanesque Revival, and Gothic Revival. A fair observation might be that the older the grave markers, the more ornate. Newer sections, observed from the vantage point of the cemeteries crest, fall away to newer, less decorated markers. The mausoleum, located centrally, and below the Old Circle is heralded as

the most architecturally significant. This is primarily due to the Moorish Byzantine design, wrought iron grillwork, red tiled roof, and size. It was built in 1910 and sold to the city in 1969.

The crypts hold their own mysteries. Some simply provide above ground housing for vaults of loved ones. Others with ornate doors open into areas for seated reflection, and spaces for floral tributes. One atop the Old Circle area incorporates a stained glass window overlooking the city below. In fashion in the late 1800’s and early 20th century, the crypts in Spring Hill Cemetery are stately, regal reminders of the importance that was afforded to the deceased of the day.

The cemetery contains numerous sections, including the Mt. Olivet Roman Catholic Cemetery, the B’Nai Cemetery,the Lowenstein Cemetery, an American Legion field, the Confederate Veteran’s Cemetery, and a potter’s field. The potter’s field section is said to have a tree that was used for lynchings, and sounds of strangling are rumored to be heard from the spirits of those hanged there.

Monuments exposed to the elements weather over time. The years of chemical valley pollution also took their toll. Nature does her part with lichens and moss. Cemetery staff clean and scrub in an effort to preserve the tributes to Charleston’s residents.

Although originally a 20-acre cemetery, it has grown over the years to encompass over 170 acres. In 1908 and 1910, land was offered to the city by the Wood and Wehrle families. The city voted against acquiring the additional land for the cemetery and instead voted to use it for a park. A city park was created that was used until 1971 when the land was used to create the residential community, City Park Village, now called Spring Hill Apartments.

Today, walking tours are given of the cemetery’s history. Bird watching clubs frequent the grounds to catalog various species. People walk the grounds to enjoy the view of the capitol city below, including a stunning view of the Capitol’s shimmering gold dome. Visitors come to view the resting places of both the famous and the ordinary. Collectively, they represent Charleston’s history.

The Woodrum’s Building is next on the Looking Back tour of Charleston’s history.