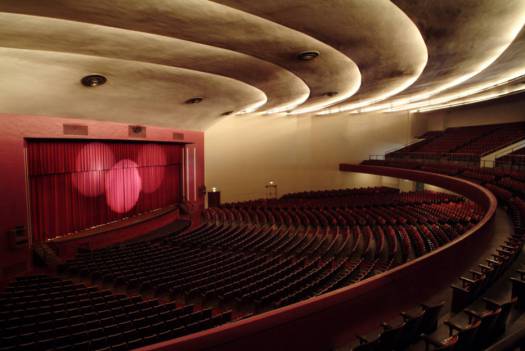 Looking Back at the Municipal Auditorium

New Years Eve of 1952. Hundreds of revelers were preparing to descend on the Municipal Auditorium for a concert by the country music star Hank Williams. Advance ticket sales already totaled $3,500 with more seats anticipated to be sold at the door. In 2017 prices, that would be over $32,000. Just hours before the concert was to begin, Williams cancelled due to an ice storm that prevented his plane from taking off for Charleston. Hundreds of fans were disappointed to miss seeing him. Thousands more would be stunned to learn of his death in the backseat of his Cadillac near Oak Hill, West Virginia while being driven to Canton, Ohio for a New Year’s Day performance.

Regardless of that dubious moment in the structure’s history, the Municipal Auditorium is an Art Deco gem in the heart of Charleston’s downtown district. Owing to a controversial start, the auditorium almost wasn’t. The proposed auditorium became a source of much controversy in the early 1930’s. The notion to spend an immense amount of money wasn’t met with a positive response from everyone.  Supporters felt Charleston needed a space for performers to come to town to enhance the culture and provide quality entertainment in the area.

Charleston applied for a $412,000 Public Works Administration grant in 1936. They were denied due to the lack of funds. Not to be deterred, the council applied for the same grant the following year and was subsequently awarded $250,000 for the project.

The site of the building had been a concave plot of earth that filled with water when it rained, reducing it to a virtual pit of mud. Sitting on less than one acre, the auditorium’s groundbreaking took place on January 20, 1938 and construction was concluded a year later in 1939. The unsightly corner was transformed into a community landmark.

Designed by local architect Alphonso Wysong, the classic styling of the “Art Deco Grande Dame” has remained a timeless fixture of architectural impact. The Wyoming Theater in Mullens, West Virginia, although far less grand, was also designed by Wysong.

The Municipal Auditorium is built with steel joist construction and a steel frame resting on concrete piles. It is surrounded by a watertight subterranean retaining wall, concrete floors, metal lath and plaster ceilings, concrete and cinder block brick-faced curtain walls, and a stylistic concrete facade.

The impressive curved facade has three stair tower blocks. The dominant front center block houses the grand central staircase. Rising nearly the full height of the auditorium, it is the building’s most prominent physical feature. The building name is cast in concrete making a bold, enduring statement. The auditorium is perhaps the most notable example of Art Deco architecture in Charleston. The building has experienced very few changes over the years that would serve to disrupt the visual impact of the Art Deco monolith.

With a capacity of 3,483 (2,377 on the orchestra level and 1,106 on the balcony), the Municipal Auditorium is the largest theater in West Virginia. A variety of events have graced the 65 by 85.5 foot stage over nearly 8 decades. Numerous events have taken advantage of a venue with excellent sight lines and superior acoustics. Political events held there include President Harry Truman in a campaign speech that was a live national radio broadcast on October 1, 1948.

On the evening of November 7, 1939, the Municipal Auditorium hosted an inaugural performance. Held two days after the dedication ceremony, the Community Music Association brought in French violinist Zino Francescatti to play before a crowd of 4,000 patrons. Since then, the auditorium has hosted an endless variety of musical performances from around the world.

Then sitting Mayor John T. Copenhaver issued an edict banning all rock-n-roll shows after an especially boisterous crowd of youngsters got out of hand at a 1957 performance.  But the auditorium has gone on to host Alice Cooper, Bob Dylan, Billy Joel, and Crosby, Stills, and Nash.

Other diverse events there include the Beni Kedem Shrine Band, Morris Harvey College basketball games in the 1950s (with the court and bleachers placed on the stage), the Ice Capades, and Shrine Circus from 1947 to 1959. Directly underneath the stage, a large basement room at one time held a police department pistol range.

The Municipal Auditorium was listed on the National Register of Historic Places in 1999.

Next month, Looking Back visits another, albeit much smaller, 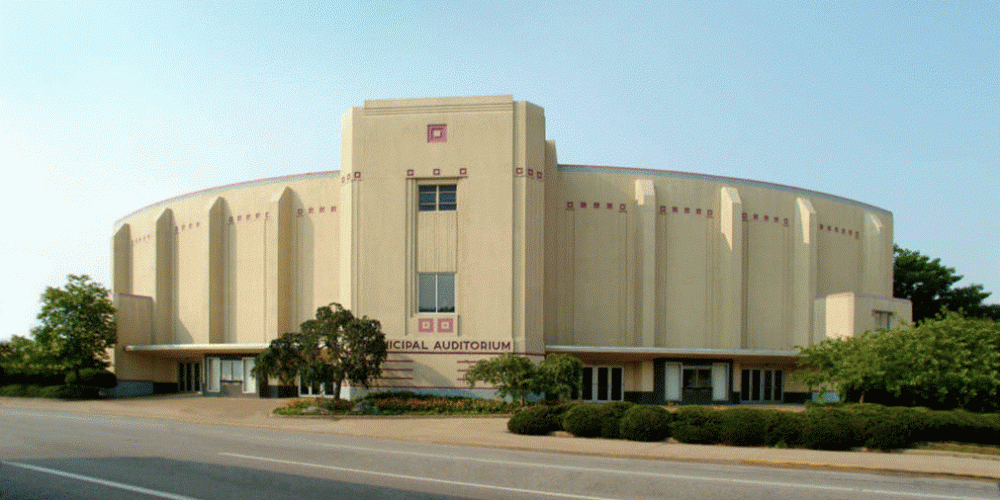