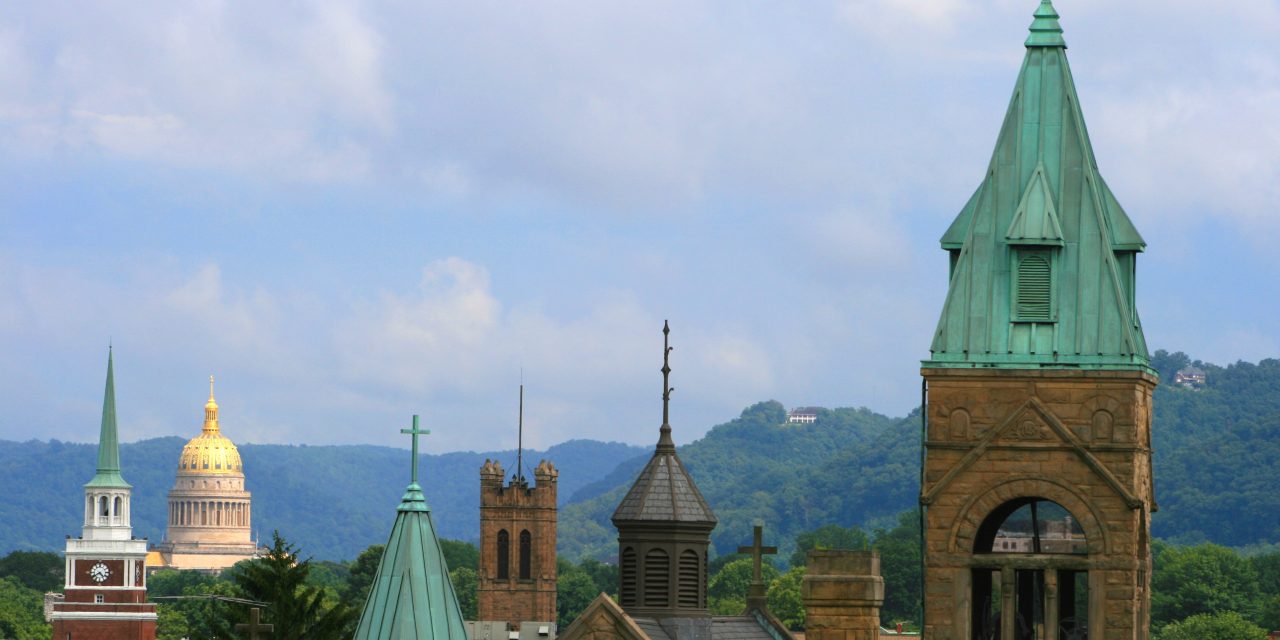 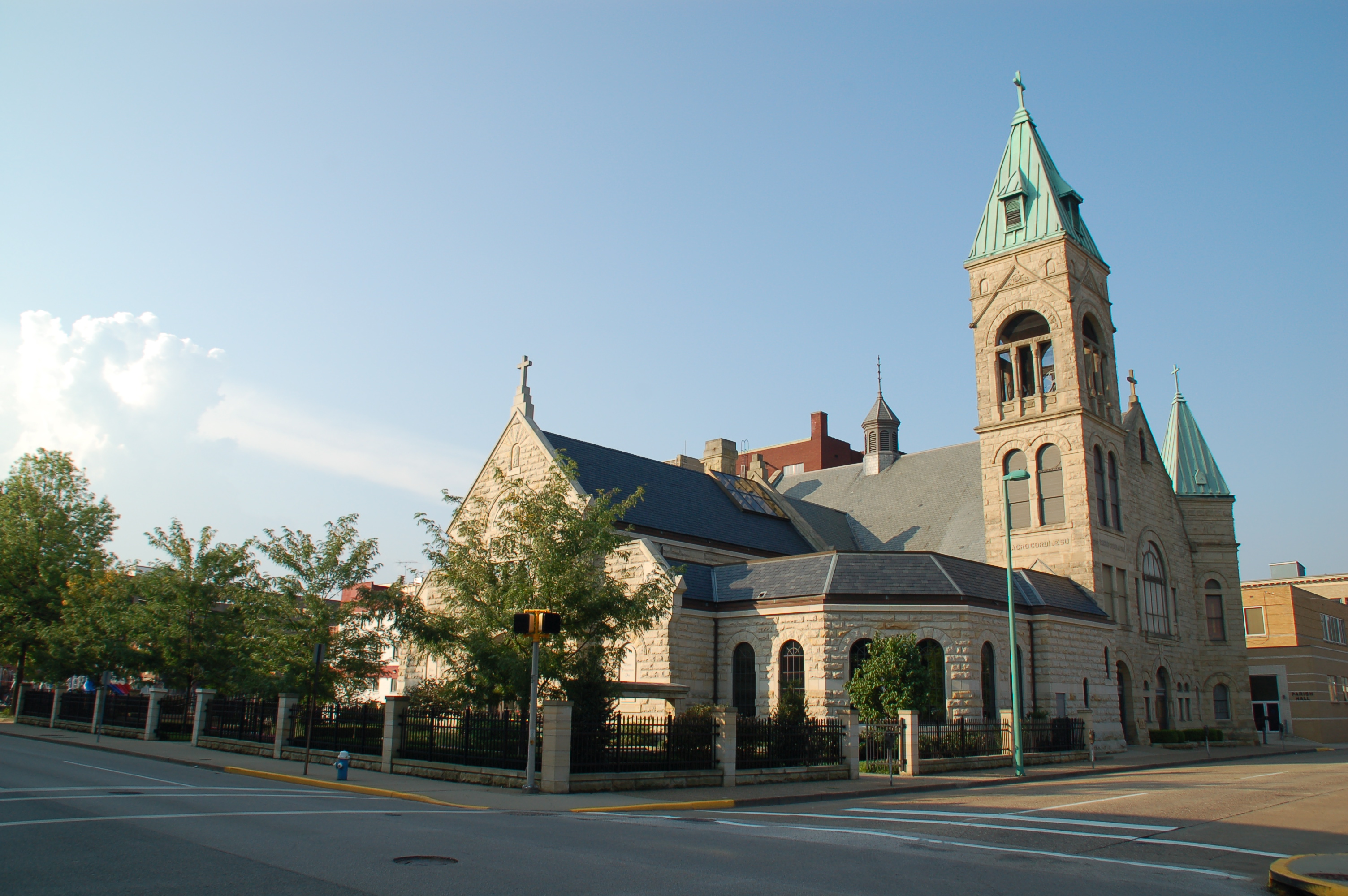 Sacred Heart is the more commonly known, shortened moniker for the Basilica of the Co-Catherdral of the Sacred Heart. The earliest Catholic Church in Charleston, it was first referred to as the Sacred Heart parish. In October of 1974, it became the co-cathedral, and in 2009, Sacred Heart was elevated to a Minor Basilica.

But what of the building that houses the people of Sacred Heart? A church is comprised of people, but the building housing the people provides a congregation’s home. In lieu of a sanctuary, the first Mass celebrated in Charleston took place in the Kanawha County courthouse in 1836. By 1866, led by Father Stenger, Sacred Heart’s early congregations celebrated mass on the second floor of the B. Wards store on Front Street, the forerunner to present day Kanawha Boulevard.

August 1, 1866 marked the establishment of the Sacred Heart parish by Bishop Whelan of Wheeling when he purchased the property in downtown Charleston on the corner of Quarrier and Broad Streets. The parish was comprised of sixty-three families from Kanawha, Fayette, Clay, Nicholas, Putnam and Boone counties. He also purchased three and a quarter additional acres adjacent to the Quarrier Street property extending from Virginia Street to Lee Street.

A two story brick building served as the parish’s church and a school. By 1885, Father Stenger began raising money for a new church building. The parishioners as well as some of the towns prominent Protestants provided financial assistance to the funding of a new church. H. B. Lowe was selected as the architect, and six hundred dollars was spent for plans and specifications for the new building. By 1892, the congregation had grown to eighty-four English families and fifty-six German families, with a school enrollment of ninety students. The congregation celebrated the first Mass in the present church following its completion in 1897.

Following Father Stenger’s death in 1900, the Capuchin friars constructed a new rectory and made additions to the church building in the first few years of the new century. A pipe organ was installed in the sanctuary in 1905. A marble high alter and German stained glass windows were added in 1909. Finally, 1911 saw, and heard, the addition of three bells in the church’s tower. In 1948, the old pipe organ was replaced with an electronic organ. Weekly bingo was started to raise money for a new pipe organ.

Sacred Heart opened a new school building in 1920, and in 1922 began the first high school classes. The church bought and renovated a building to house the high school grades in 1927. The new high school was constructed and consequently opened in 1941 and was renamed Charleston Catholic High School. The grade school was remodeled in 1942.

The 1950’s brought more growth and renovations to Sacred Heart. 1950 and ’51 brought interior renovations. The rectory was completed in 1952, and 1958 saw the completion of a new convent. Also in 1958, new pews were installed.

Growth continued and the ‘church’ became a cluster of buildings to serve the needs of the congregants. In 1974, Pope Paul VI renamed the Diocese of Wheeling as the Diocese of Wheeling-Charleston and Sacred Heart became a Co-Catherdral for the Diocese. In 1980, Father Edward Sadie became the cathedral rector. It was in the 1980’s that the cathedral underwent major renovations, both interior and exterior. The stained glass was cleaned and repaired. A 58-rank pipe organ was installed. The building was carpeted and air-conditioned.

Although the face of Sacred Heart remains the building on Quarrier and Broad, the campus covers a much larger area, including a grade school, day care, high school, parking lots, an apartment complex for the elderly, church offices and apartments for parish clergy. On November 9, 2009, Pope Benedict XVI raised Sacred Heart to a Minor Basilica.

October of this year, marked the Sesquicentennial Anniversary of Sacred Heart Co-Catherdral. A month long celebration was held, culminating in a celebration of Mass and a celebratory reception on October 30, 2016.

The Catholic Church also celebrates the Year of Mercy in 2016. Called for by Pope Francis in March of 2015, the Year of Mercy concluded in November of 2016. As Catholics around the world celebrated opening of ‘doors of mercy,’ so too did Charleston’s historical Sacred Heart.

Next month, Looking Back will profile St. John’s Episcopal Church. 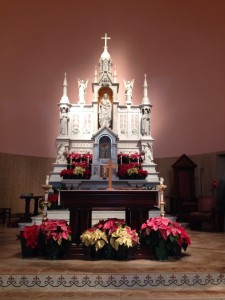 Email your responses about the Basilica of the Co-Catherdral of the Sacred Heart, or requests for locations you’d like Looking Back to visit to thewriter@mlynne.com.